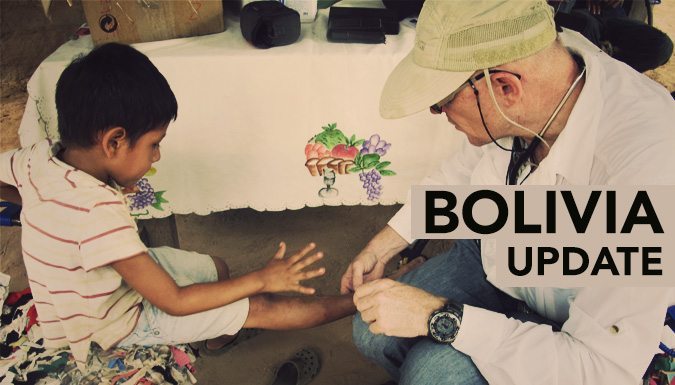 Rumors of serious violence in Pakistan came into my inbox while I was packing to move on to Bolivia. Two suicide bombers blew themselves up on a beautiful Sunday morning in the largest church in Peshawar. The result was devastating: more than 80 deaths and 200 seriously injured.

Peshawar is located close to the border of Afghanistan. The attacks were immediately claimed by the Taliban as a protest against the attacks of the U.S. drones on Taliban hideouts in the region.

Life became absolutely impossible in this region… especially among the millions of Christians, the largest group among the minority groups. You can always have a view of this brutal ongoing manslaughter when you go to our Facebook pages: “Doctors on Mission” or “Rik Celie”.

The numerous reports about the immense suffering there could not let us be untouched. The wounded were mostly abandoned and died — often under severe pain – from their infected wounds.

So, our medical / pastoral teams went out to help despite the difficult financial situation of our medical mission along with a rather demanding and relatively expensive medical mission. We hope there will be again provision through our sponsorship plan (see “DM – Challenge” on www.DoctorsOnMission.org) to continue our work.

It was very dangerous for our team members to go helping there. However they are just waiting to jump in and go out to help; risking their own life whenever enough donations come in to organize a medical / pastoral expedition.

For these minority groups, there are no plans when disaster strikes. The Muslim government does not help … The hospitals — run by Muslims – often don’t want to treat them or they treat them badly. I myself heard stories on the spot how Muslims administered lethal injections in some of these “clinics “. And even moderate Muslims – who would want to help – are afraid of retaliation of their own fundamentalist “brothers.”

Our self-designed “disaster plan” was a bold plan. We have gone to assist wherever possible with two teams through four expeditions. In the meantime, several other bombs – usually suicide bomb attacks – went off in same city and region. There was a suicide bomb in the public market with serious injuries. Then, all occupants of a bus were slain. A bus full of kids … Also, the WHO team (World Health Organization) was hit hard by a road bomb. Therefore, the polio vaccination campaign was halted. Pakistan is one of the three countries in the world where polio is still endemic. The Taliban doesn’t allow these vaccinations and suspects the medical teams of a “plot” from the West wanting to perform sterilization on Muslim children! These false accusations cause more additional risk for our team… We are coming more and more in their sights  …

Despite all this, we were able to help 91 families who were seriously injured or who had family members killed. We could bring them food, medicines and pastoral care. To my knowledge there was no other assistance from abroad.

Doctors on Mission also helps with individual cases in Northern Pakistan with guidance and payment of emergency operations. A 14 -year-old boy, Raheel, was successfully operated because of a tumor. Furthermore, this region was again hit by heavy flooding.

In the meantime, I myself am working in Bolivia. Here I pursue activities to further our mission. We went for a medical outreach to the Bolivian Amazon. There too, we could provide the necessary medical and pastoral care. It was very hot and we suffered from countless mosquito and insect bites.

Then, we went to our Clinic in Tarija, South-Bolivia. The clinic is running fine there! Our doctors Ino, Victor Hugo and Ester are doing what they can to serve the people who look for their help.  Dr. Besabe

is also committed to see every day many poor patients coming to our mission base in the Andes (Yamparaez) about 500 Km. North of Tarija.

At this moment, I returned from an expedition to Paichu in the Andes region. Here, we started almost 10 years ago bringing in the first time medical Doctors, nurses and dentists. The cooperation with the local health authorities was all the time optimal here. A medical Health Care Center and a church have been established. Dr. Ino, Dr. Ester and I came to help Dr. Oscar to cover all care for mother and child in the whole region. Dr. Oscar lives and works there.

The local authorities have extensively thanked us and underscored how many lives we saved thanks to our doctor(s) and the use of our ambulance in recent years. All this was only possible through your donations.

In the meantime, Pr. Romulo ‘s church — destroyed by an earthquake in the Andes (Abra K’asa) has been rebuilt thanks to some special gifts for this cause. A first couple has already been married in the church, even without having a real floor, windows or doors ( see photo ).

In the next letter I will elaborate more about Haiti. My plan is to go to Haiti once the mission in Bolivia is finished. However, I heard about the tragedy in the Philippines and I am in contact with a friend who is Director of “Remember the Poor” and also with “Physicians for Peace”, both located on the Philippines. The ravage seems to be enormous and many affected islands have still not been reached.

God bless you and many greetings from…