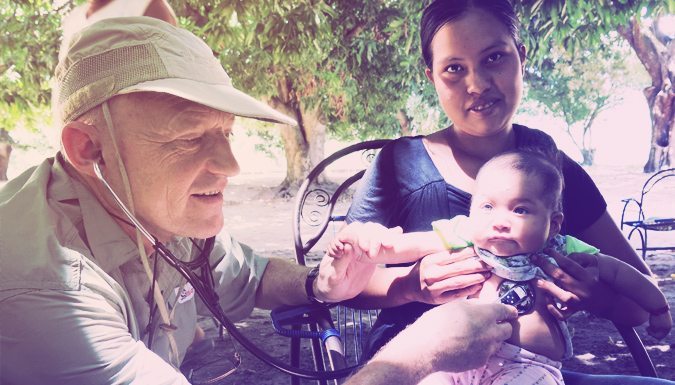 Many greetings from the “Chiquitania” region in Bolivia! This region is an extensive region of several hundred miles square east of Santa Cruz de la Sierra, Bolivia and bordering with Brazil.

Originally, the Chiquitanas formed the largest group among 13 different ethnic groups in the Amazon basin east of the Bolivian Andes. Over 20 years ago I worked there with the Yuracare and the Aeroeo tribes, who belong to these 13 “Amazon” tribes. A Dutch TV Crew filmed this work in 1997.

Today, we see in this area a very heterogeneous group that’s mixed, even with some Quetchua’s (ancient Inca tribes), who came down from the Andes Mountains.

The heat here is overwhelming, especially during these summer months (December – March) in the Southern Hemisphere. It must be more than a 100 degrees Fahrenheit. Moreover, it’s very humid. My phone shows 100% humidity all of the time… There is no electricity available in the places where we do our medical mission work. We need to work under the shade of some big trees.

Poverty is serious here and, it’s hard to find some other help in these remote regions which are also often flooded. Doctors on Mission is bringing care for body, soul and spirit to these regions. We started this work 5 years ago, but we needed to move further south because of threats from the cocaine-related drug mafia. We are still working to get out of the mess that people provoked us into due to an extortion scandal. But we all know that if God closes one door, He does open another.

I am always impressed to see here so many young “single” mothers who need to take care of several children. Most tell me that their husband went away to look for work in the city, but never came back…

We are providing these young mothers and their children with a more dignified life by visiting them regularly and encouraging them. We of course also eliminate the ubiquitous parasites and give them the necessary vitamins to restore their bodies to health because many minerals and vitamins are taken away from them by the parasites. Some kinds of parasites – and there are tens of thousands in one body – are, for example, fond of iron. This provokes serious anemia (shortage of red blood cells). This in turn does not only provoke fatigue but also delayed growth and development in children along with episodes of severe pain, especially in the joints, abdomen, and limbs. It’s not only the skin that turns out pale but even the color of their hair can change from black to rusty red. I am just giving this one small example to let you understand what kind of pains just a cheap amount of Multivitamins with Iron can alleviate after treating their parasites. Our problem however is that we reach out constantly to thousands of such kids. So, altogether, our efforts have their monthly costs. I feel sometimes that many – who are not in the medical field – don’t see this. We also pay a lot of attention to preventive and curative dental care. The most terrible messages these last few years are always coming from the same angle. It’s news that you too receive when you turn on CNN, but to me it comes on a more personal level as I have been there and know the people. It makes it a lot worse… I am talking about northern Pakistan… What happened in Paris – regarding the terrorist attacks – is just a small reflection of what happens every day to the persecuted Christians and minority groups in many other countries. It’s certainly not different in northern Pakistan. The terror is – as you probably know – extremely barbaric. It often keeps me awake… Many suggest that I just let it go, but it’s hard to keep these messages “far from my bed.”

What shocked me most was the simple story of Shama, a 25-year-old pregnant woman. She was falsely accused of blasphemy in Kot Radha Kishan, about 60 Km. southwest of Lahore. She was ultimately thrown alive in a blast furnace of a local brick factory together with her husband Shahzad Masih.

Shama – who is illiterate – was accused of having thrown away some papers of the Qur’an when she was clearing out the house of her deceased father-in-law. She cried out that she had absolutely no idea what was written on that paper (as she was illiterate!) but the crowd did not listen her… More than 1,000 people from three different villages stormed their house. They literally broke off a piece of their roof, tortured them and dragged them to throw them in the furnace. Can it be any crueler? The couple had been
Shama married for eight years and had three children. Our team was asked to provide urgent aid for the three surviving children (accommodation, food, schooling, etc.) The children are now safe in a secret place.

They wrote me, “These children are very anxious and completely bewildered, desolate and desperate. Their future is uncertain. We need urgent help for food and to allow them to study further. They need our helping hands!”

This is obviously not an isolated case. There are daily gruesome stories. The smallest pretext is used to accuse Christians and other groups. It is enough that the crowd is incited by a local religious leader. The result is that the minority groups leave the villages and are constantly on the run… Our team wrote: “We daily risk undergoing the same fate…” Now, ISIS is there too, operating alongside the Taliban and Al Qaeda. There are even rumors that ISIS pays up to $30,000 oil dollars to the Taliban or Al Qaeda for every white man (from the countries participating in the coalition) delivered to them.

A planned expedition to Pakistan in December to assist my team therefore became impossible. Moreover, I couldn’t get a visa. At the same time, I myself, still in Europe, needed again an urgent hospitalization. Thank God I was in Belgium and all ended well.

While I was still in the Hospital in Belgium – where I had been witnessing in the previous months – something cruel happened again. And again, it was in the same city (Peshawar, northern Pakistan) where last year 85 people died and more than 100 were seriously injured because of suicide attacks by the Taliban on the local church community. This is not very far from where our local medical team operates.

A group of Taliban – disguised in army uniforms – had now invaded a non-Muslim school. They executed as many as 132 children and 8 teachers. Still worse were the 200 children who were shot but survived the massacre. Still worse: they could not go to the Muslim hospitals to receive treatment! The pictures of the shot and surviving children were just too horrific to show. As a team, we were able to help several children.

As an organization, however, we are far too limited. This is due to both the lack of financial resources, but also because of the great dangers and organizational difficulties on the local level. The big question remains: “Who can be trusted and who cannot,” even when you have been there. Some Western people may think different, but I have heard too many proven stories to know that we need to be extremely careful!

It is however heartbreaking to hear messages like this one that we received: “Dr. Rik, please, we request at this very sad time to think about these needy children who are so badly injured and are looking for urgent medical treatment. We need to help them! Too many children are right now in critical condition in the operation theater.” I have also good news! And this time, it comes from Haiti! In Morency we could finally start construction of the orphanage. We do not have large funds, but do what we can with what we have received. Meanwhile, there are already a few toilets and the walls are built for the construction of the dining room that will be used for all kind of activities, such as for training.

At this time we are looking for funds to build the roof. Given the seismic activity in the region we are trying to build everything as solid as possible, but that is not easy with the limited resources that we have. The key now is that these children have a safe harbor.

Some more information about Haiti will come as I will continue my outreach to Haiti after Bolivia.

Many greetings from all DM personnel!