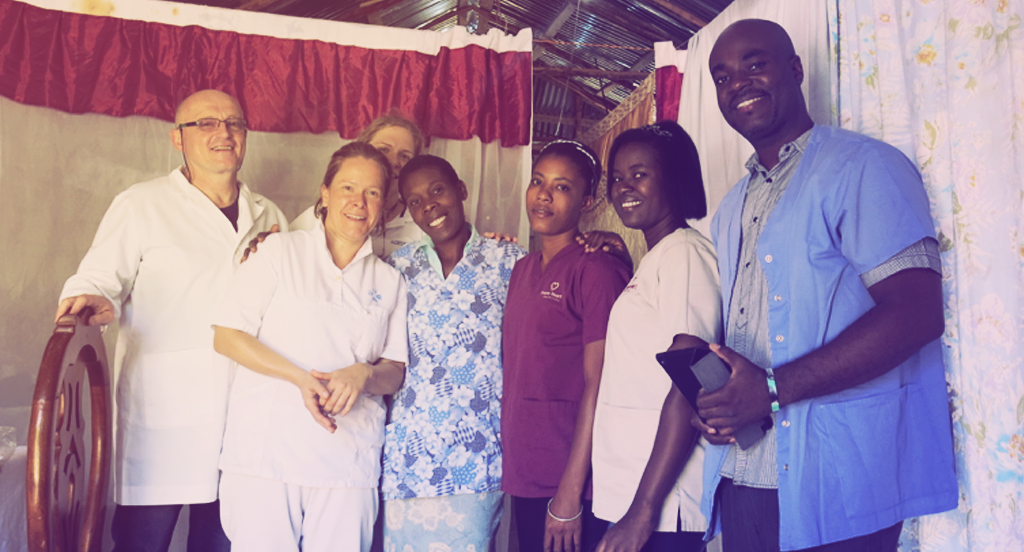 I am sitting in a room in Carrefour, just west of Port-au-Prince, Haiti while I am writing these first notes of my next Newsletter. My Internet connection is slow and we have irregular electricity service. We came just back from the far southwest of Haiti where the orphans of Morency live and where we do a lot of medical work as well. We also have a clinic there and started to build basic infrastructure for these children.

Morency has no basic services. There is no running water despite the high temperatures and no electricity. So, obviously, there is no Internet either in this place. I believe that a few solar panels could make a big difference but first we need food, medicine and some basic infrastructure to give these kids some good schooling, a place to stay and a goal to live for. They are almost all Christians as the church is the only group who can assist in such a place.

While returning to Port au Prince, we nearly escaped a head-on car accident due to a reckless driver who pushed our 22 year old jeep – filled with 10 people of the team and medicines – off road. Traffic rules don’t exist in Haiti and certainly not in inland Haiti.

We were driving with several doctors, nurses, pastors and some logistical people “on board.” But even worse were the 100’s of pedestrians in the main market place. We barely could avoid them as we drove through this poor market place in Port au Prince. It’s completely chaotic there. Conditions are very unhygienic. I literally saw the rats in full daylight moving around the people and they didn’t even react! Needless to say, they went through many worse traumatic experiences the past few years. Also, needless to say, this is why epidemics of certain diseases occur…

Once we arrived in Morency, we were able to diagnose hundreds of patients. It was the first time that I didn’t need to do consultations outside, thanks to our new multifunctional building there. It’s very basic, but it works… We now have real beds to sleep in! This is due to your gifts!

But conditions are still hard as temperatures rose far above 100 degrees Fahrenheit.

A Norwegian dentist team came to help us by teaching how to prevent dental problems and treated many kids.

I observed that many children were contracted with scabies, a disease caused by infestation with a mite that can burrow and deposit eggs in the human skin. Transmission usually goes very fast and occurs directly from skin-to-skin contact. It gives a lot of pruritus, erythematous papules and red nodules. When the disease is not treated, you can face big problems. Because of the heavy pruritus, children start to crab their skin and cause secondary streptococcal infection in the skin lesions, with potential complications of rheumatic heart disease or even post streptococcal glomerulonephritis, a very serious kidney disease that can lead to kidney failure and death on a young age.

Haiti recently suffered an epidemic of a viral disease, namely Chikungunya, spread by the same mosquito (Aedes Mosquito) that spread the Dengue and (sometimes) yellow fever.

Most frustrating are not the harsh conditions but diagnosing some kids or elder people and not being able to treat them because of lack of medicines or not having electricity or the necessary tools. Poverty seems to be an endless circle where people can easily get trapped in it from young age.

We always try to guide and help our patients financially further if needed because sometimes, we have no other choice than to refer them to a hospital. If we don’t give them the money, they simply can’t go because they cannot pay their transportation costs or treatment costs. Once back in Port-au-Prince, I have always some time to catch up with some needed administration work while team members are looking to find the needed medicines for the next trip.

We continued our outreach to the mountains in Manceaux, Artibonite where we have also a lot of orphans and elderly people who were waiting urgently for help. I will write more about the people in the Haitian mountains (Manceaux) in my next Newsletter…

I want to close this letter with a small update about Bolivia and Pakistan.

I am following up with the Bolivian team there wherever I am. Thanks to the good leadership of Dr. Ino – who is our national director for Bolivia – we are doing well and came through a lot of dangerous situations during the last years. We no longer have the threats of cocaine-related drug families as we moved to another place more to the southeast of Bolivia, but still very close to the Brazilian boarder where poverty is worst. Thank God that we also could manage to stay out of the spot of an extreme socialistic government in Bolivia which is in fact a communist regime. Just as in Russia, opposition does not exist anymore as most of those who came up for democracy disappeared, went to prison or fled the country. Everybody knows that they better shut their mouth to keep their family safe. So, nobody is posing any treat to the regime anymore.

The bad news seems to evolve in Pakistan and bomb attacks, persecution and needs seem to be never-ending. Here are some phrases of one of my team members: “It’ s very sad to share with you that we got 20 dead and 80 injured people in another twin suicide attack (Taliban). One was carried out in an Evangelical church and another one in a Catholic church. Both churches are in Youhanabad, Lahore. We visited the affected area and helped out where we could in front of the church. It’s very hard for me to explain everything because we cried and prayed and heard all the time voices crying to us: ‘Help us, Help us…’ It’s impossible to describe such a situation. The bombings occurred in a neighborhood of Youhanabad that is home to more than 100,000 Christians. To be honest, we don’t know how to handle further this situation. We need your support…”

Here is another note from Pakistan: “Due to lack of medical care, a young boy of 19 years died last night due to complications after the bomb attack…. How many more? Look at the boy with the stick through his belly. I don’t have words to describe the pain, frustration and hardship but we do hope that we can bring some relief…”

The Pakistani people were asking to help me to support all affected families from the bomb blasts in the churches but this is just impossible for our ministry.

The truth is that you are better off there to die than to suffer when attacks happen. This is because the few primitive Muslim hospitals available will not help the minority groups with other beliefs. When I was there, I got word from a local pastor that they sometimes inject the Christians in the hospitals with poison. I don’t know how far this is true, but I do know that most Christians fear to go to a hospital and get help because of this. There are some private clinics but these are just too expensive. The Christians are one of the poorest groups as they cannot study for a profession and they cannot do business.

Nauman Masih, a 15-year-old boy was set on fire (Mid April) in Lahore, Pakistan because he said he was a Christian. Two men approached him and asked him about his religion. When he said he was a Christian, they beat him, and when he tried to run away they followed him, threw kerosene over him and set him on fire. Sadly enough, the boy passed away in heavy pains a few days later…

I tried to be quick through my FB page but to no much avail. All information can always be found on www.DoctorsOnMission.org The Donation buttons on the English site (English flag) always provide a mailing address to send a check and also the option to donate through Credit Card or via PayPal.

I want to thank you for all your prayers and support on behalf of the DM teams.