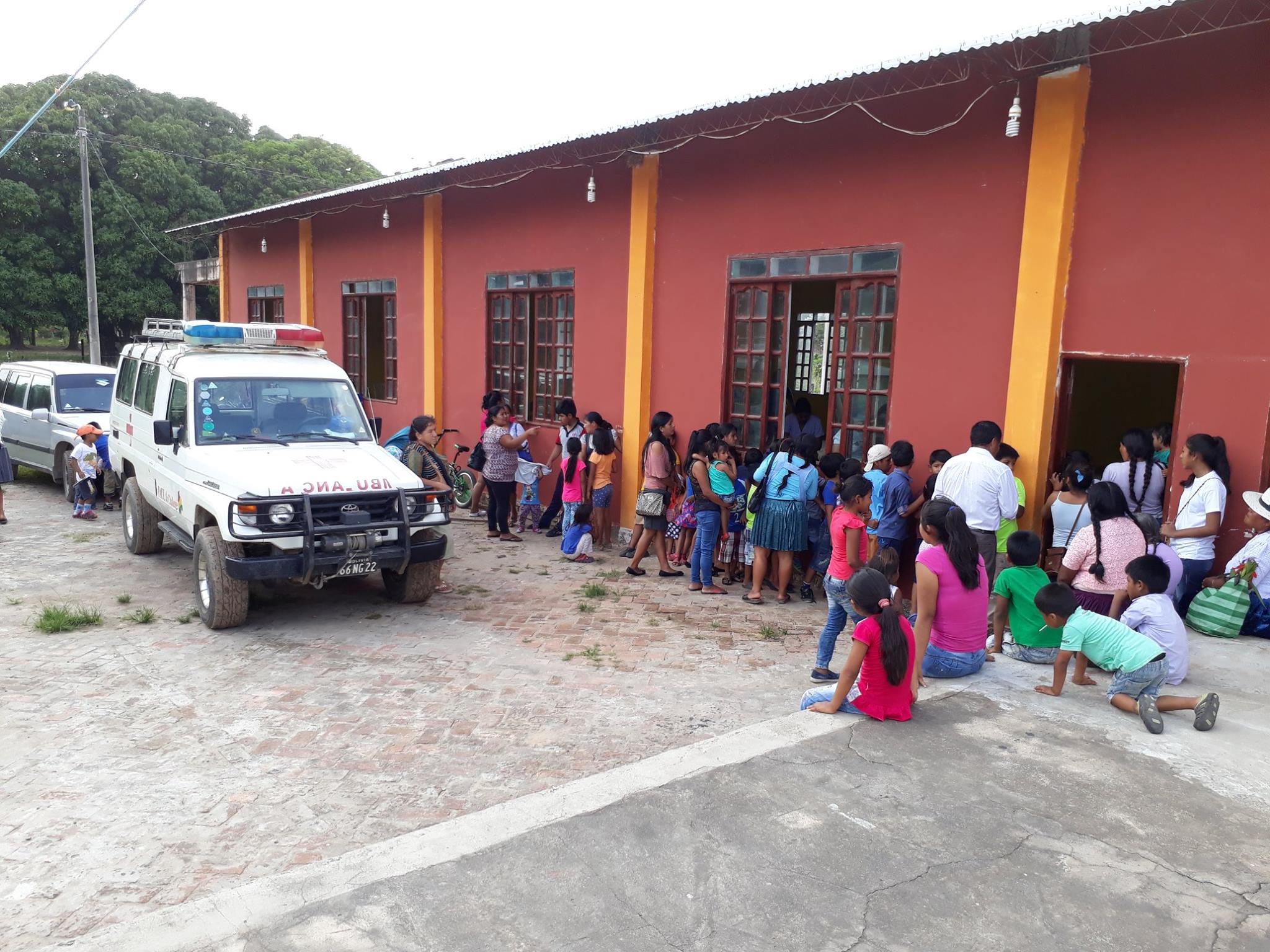 I’m back in Bolivia after being “recovered” from some demanding medical work in Haiti’s interior (see previous letter).

However, while I am here in Bolivia, Haiti’s emergency cries remain… For example, there is a repeated “call” of our Haitian team manager. This is especially about the need for a small village in Haiti called Gervais, where I worked last summer. The children (along with adults and the elderly) are really hungry and there is also a chronic lack of medication that we cannot afford all the time. Nevertheless, I have already transferred some much-needed extra support in the hope that the so needed funds will come in.I also just got contact 24 hours ago with our Board and I am very thankful as we got a first designated fund of $3,500.00 for the $15,000.00 we need to have at least one-second hand 4*4 Jeep to continue the ministry in Haiti. The sad news although is that the Haitian ministry is in danger because we can’t keep up with the daily running costs. This would be dramatic for the Haitian inland people. Please, open your hearts and consider a monthly gift through https://www.doctorsonmission.org/english/donate/

Here in Bolivia there is a real problem that came into existence regarding neglecting the “Indians” tribes in the Amazon area where medical needs are great. We needed to buy again a lot of medicines and medical equipment in the city to be able to go once again to these far a way places that have no Internet, electricity or running water. We just came back from some of these tribes (Aeoreo’s and Chiquitanas).

I myself am suffering from Pediculosis (louses with lot’s of itching) and Parasitosis (diarree) but didn’t have time still to treat myself. I will do so soon ;)

We bring critical help with our Medical teams there to give a lot of smaller tribes in this region a change to survive. This region is about 25 times larger than Belgium (I can’t compare with US as a Belgian – American MD). It sometimes feels like fighting against the wall, doing this work for more then 2 decades…

At the same time we are well aware that every human life we can save is worth the effort! Every life is unique and valuable and it’s so important to reach every group in need. We need to realize this and stretch our hands out to them.

This is the reason to move on despite the many disasters that are taking place around the world. We want to bring healing, new hope and joy to this people that’s in despair!

My presence here in Bolivia is also needed to lead the team further. This is necessary to maximize the outcome of rather minimal funds that come in (and go too fast out…) to ensure that all funds are well used.

For those who are relatively new regarding Doctors On Mission’s 27th. year of work, I will give a small overview of the country, who we are and what we do.

The country of Bolivia:

We have been working in Bolivia for several decades already (and since 2010, also in Haiti). The Bolivian population is estimated at 10.6 million and multi-ethnic. The country is about 36 times larger than Belgium and is enclosed by five countries: Peru, Brazil, Paraguay, Argentina and Chile. The land borders total 4200 Miles. Half of them are shared with Brazil. Several wars caused Bolivia to lose access to the Ocean. The country has struggled with many periods of political instability, dictatorship and economic misery. This way, Bolivia became the poorest country in South-America.

The current Aymara President Evo Morales – who is already for more than 10 years in power – brings more structural help to the Andes population (Quetchua’s or Inca’s and Aymara’s) but the area that leads to Brazil is getting virtually no help. In addition to the big tribes like the Aymara’s and the Quetchua’s living in the Andes and the Guaranies (where we work with in the South near Paraguay), there are still 33 other nomadic groups (Indians) in East Bolivia. These 33 groups are endangered by poverty. Tropical diseases are many…

They live in a large area as mentioned above. During the last 10 years, these tribes were also totally ignored by the current regime, which offers only assistance in the Andes.

The east of Bolivia (biggest part) is lowland and includes the tropical wet area of the Amazon Forest. According to the UN Development Program, 64.6% of the population lives below the poverty line. In the inland, this % must be about 100…

Since a first “wake up” call in 1986-1987 during a 6-month medical internship in the poor state clinics of Sta. Cruz,  I could guide many local medical teams to area’s where no doctor has been. We were in most places the first Doctors, Nurses and Dentists who came to these places, set up local clinics and so on…in these poorest and most distressed areas in Bolivia.

We kind of copied this Bolivian work in the interior of Haiti after the Earthquake that took more then 250.000 lives and 100.000’s of (heavy) wounded people. In the after match, there was a Cholera epidemic (2010) which took the life of about 20,000 children.

The misery was so great in the inland of Haiti that we could not leave them behind. Almost everywhere I come, as a Caucasian Western doctor, I draw mostly young local doctors and nurses –  who come from these poor areas – like a magnet because they want to help their own people in these poor area’s.

Somehow, they got the opportunity to train further at the local University in a nearby city. A nearby city here means efforts with day’s of walking or catching a bus to get there (once on the main road). Due to lack of money and study debt, these Bolivian and Haitian Doctors cannot start anything in the capital centers even though these cities are already very poor like Potosi, Sucre, La Paz, Port-au-Prince and so on).

These Doctors, Dentists and Nurses are also driven by their idealism and – with the help of Doctors On Mission – we set up teams and bring them back to their place of origin deep in the interior. We share the donations that come in and go then out to their far away places to bring the so needed care.

This way, healthcare is brought to places where we usually don’t find medical personnel. Numerous rather small clinics have been set up in all these years, first in Bolivia and then in Haiti as well as an orphanage in Haiti that unfortunately was destroyed by a hurricane (Matthew) in 2016. More then a thousand died in the region but all orphans survived and relocation was made possible thanks to the work of the Haitian Doctors On Mission team.

Sometimes, I work in a different country but I want to assure you that the local teams continue their great work (as long as money is available) while I maintain contact with them. This is already a huge work because of all the questions I receive of the teams regarding diagnosis and treatments of patients and the need to provide the finances to save their lives.
The “call” is to go where there are no doctors present (too poor, no electricity, no food, no drinking water and so on). We don’t want to leave anybody behind no matter how serious disease or need for surgery is.

This way, we brought life saving care in countless villages.

I could also answer some urgent request from other organizations who didn’t got a Doctor to provide medical assistance to the minority groups in N. Pakistan (2010-2012) and during the Super Typhoon in the Philippines (2013).

Evo Morales, an Aymara and the former “Coca Leader” has been the current President for more than 10 years. His party “The movement to Socialism” is strongly communist colored/ oriented. This is accompanied by the necessary repression of the “Nomadic tribes”.

Please share your blessing on this Thanksgiving gift by setting up a monthly donation through www.doctorsonmission.org/english/donate/ via Check or Visa/ Paypal if you go to the place below according to your possibility. It’s very important to count on monthly donations regarding this work.

Administration costs are as good as zero as all is voluntary work.

Wishing you all a great Thanksgiving Day where the blessed can bless the ones who are fighting for their life!

PS1: Pictures are already put on Facebook (under name RikCelie), many others will come during the next 48 hours…

PS2: To those who have a business or any other creative idea, it would be a mutual blessing mentioning that you support Doctors On Mission by giving a small % if you for example sell products, books, some art, etc.. In Belgium, I saw the benefit of it by an MS patient who wrote her life in a book. Also, a Belgian handicapped group made some art work to sell and donatie it to Doctors On Mission. Some paintings or other creative products could be sold and – this way – you could become a big blessing while showing the world your good heart. Although, I myself – as an MD – says this, your partnership or contribution could not be spend in a better way then by giving to this rather small mission where we are trying to do so much through our local teams.