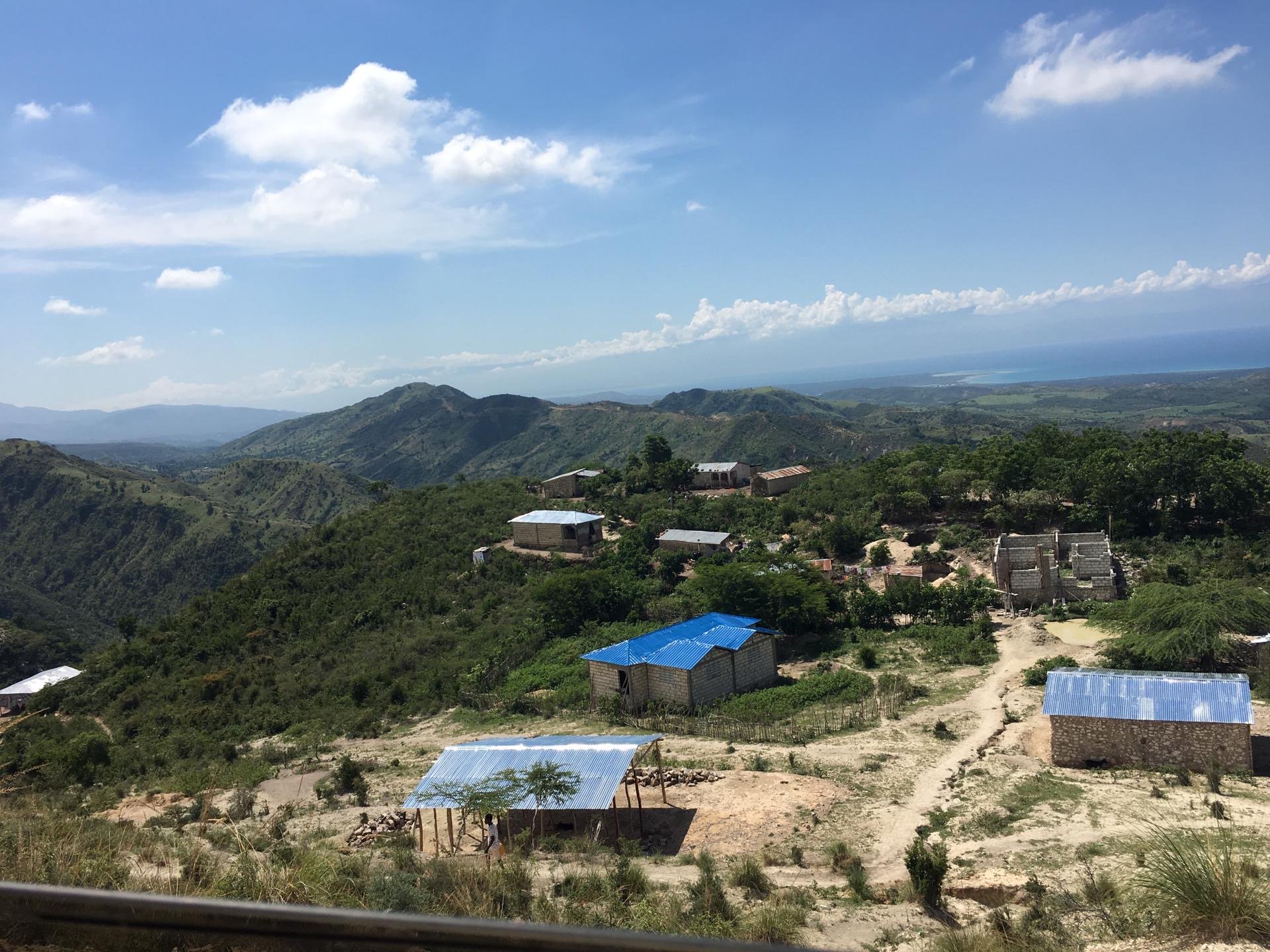 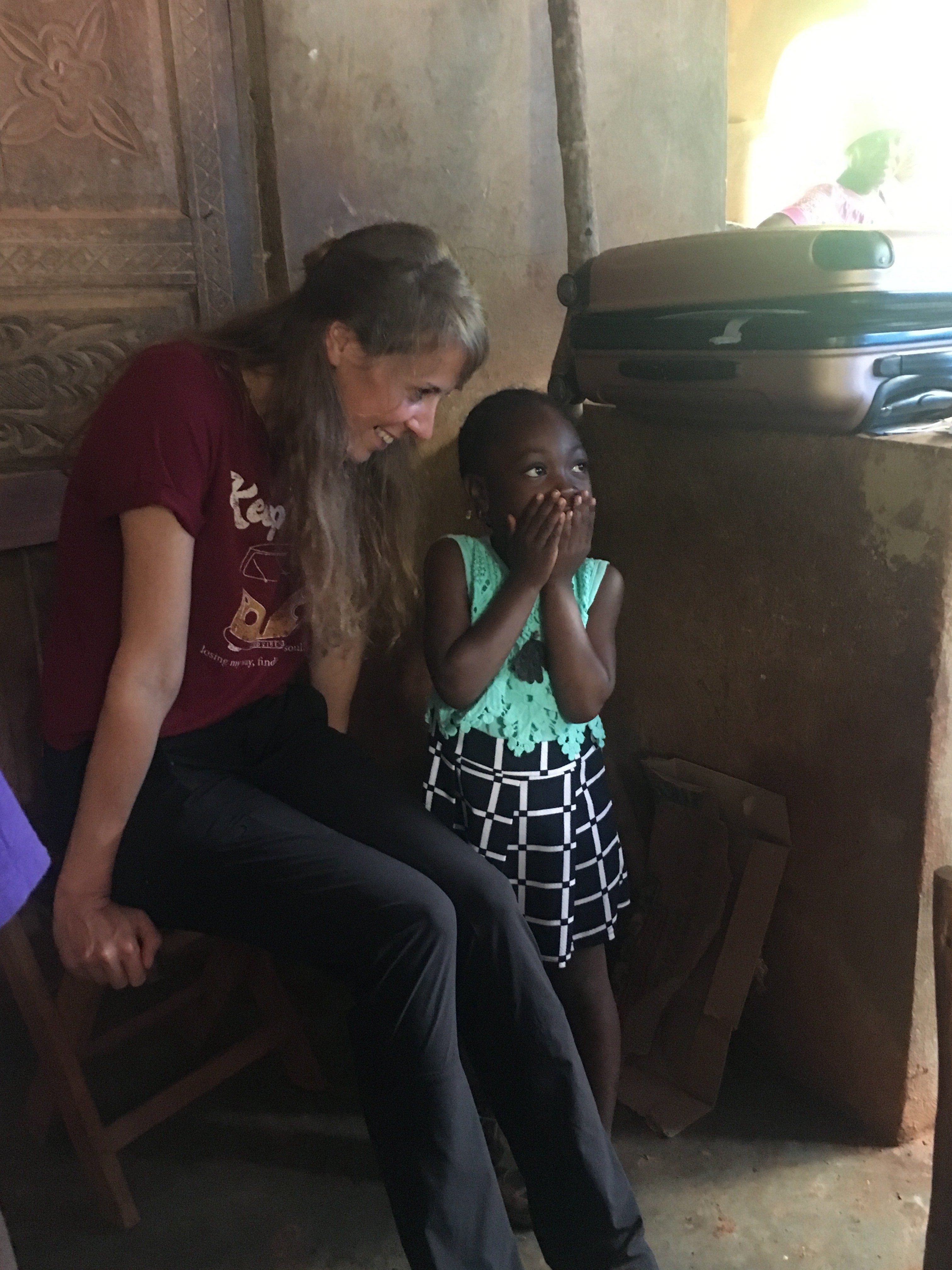 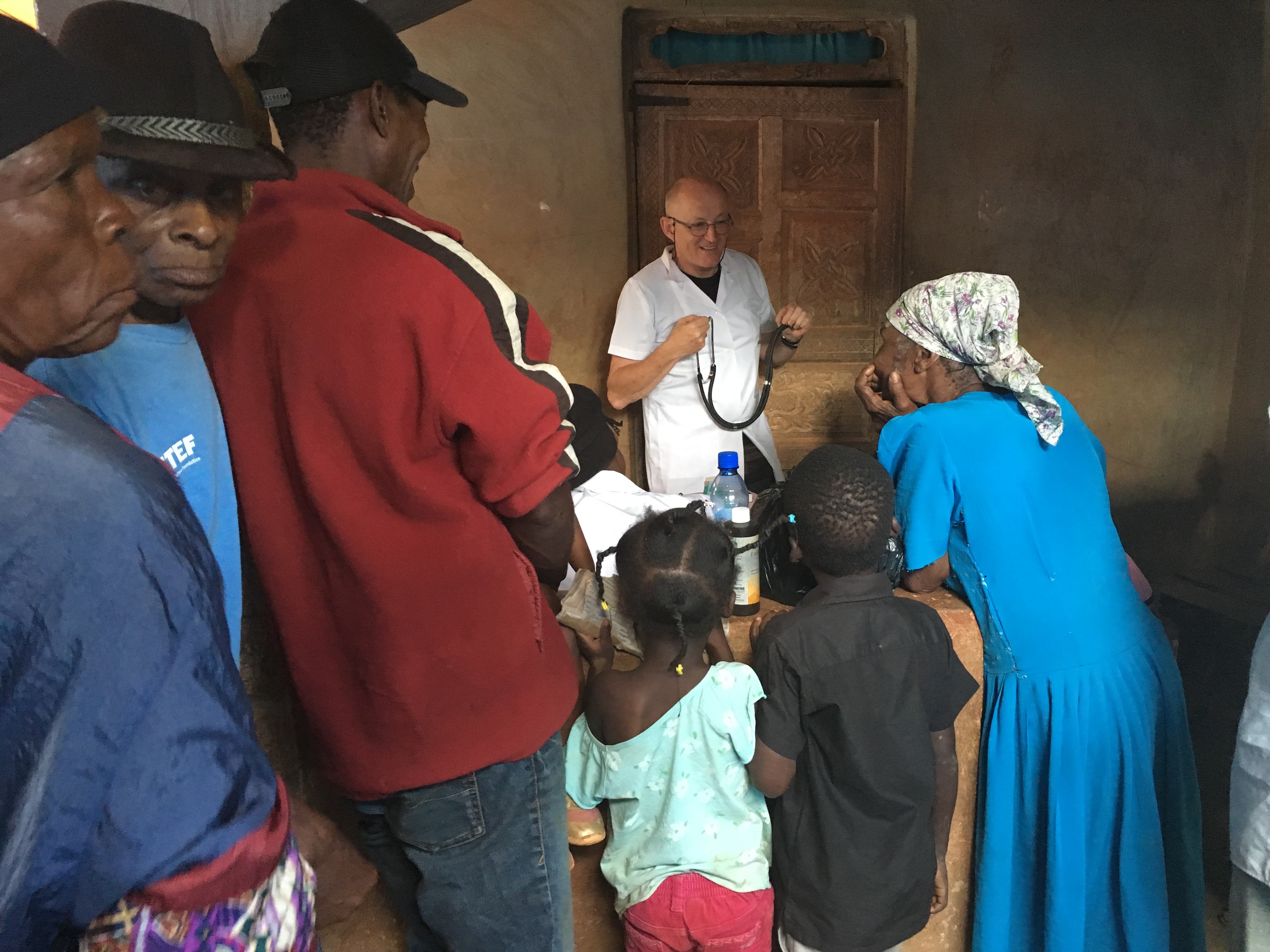 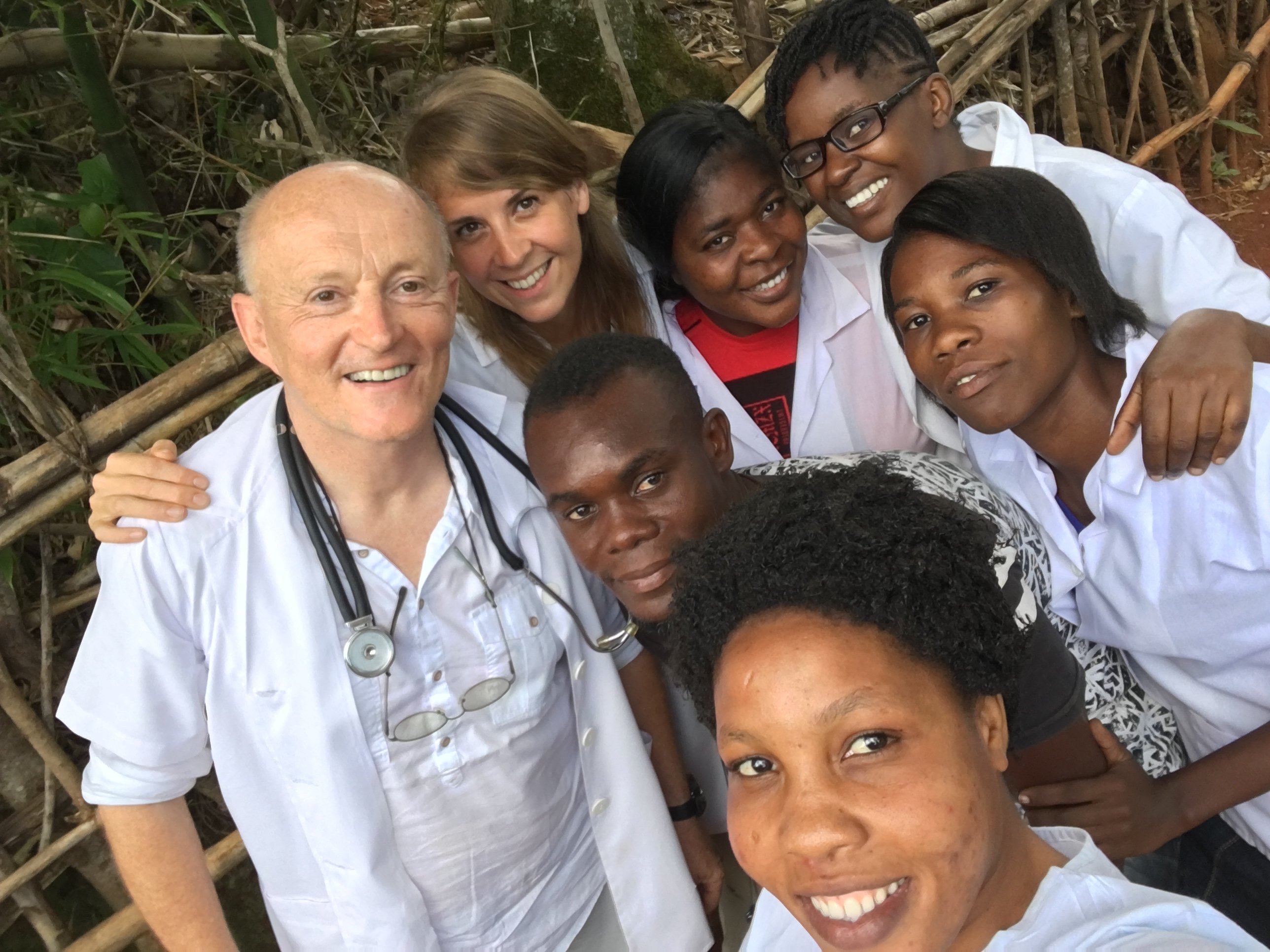 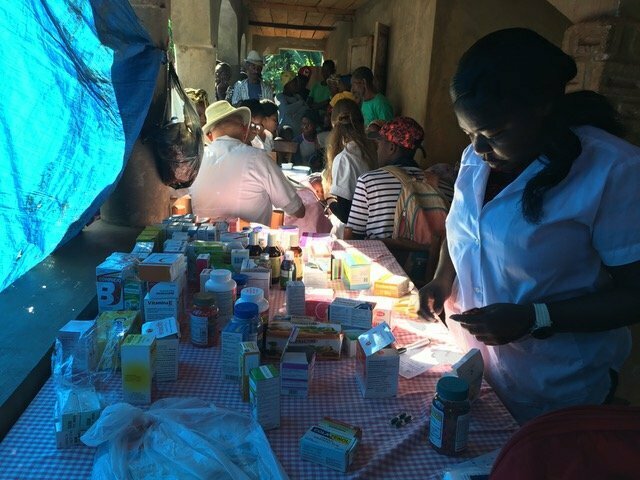 First of all, we want to wish you all a very Happy Thanksgiving week!

Recently we have done a lot of work with our medical team in very difficult accessible mountainous areas in the interior of HAITI. Reaching these isolated places is already an immense task. These are places where I never found any form of medical help. The “tracks” are in a very bad condition, very steep and slippery; certainly when a sudden tropical storm comes our way.

The needs there are immense. It remains to be seen whether we can continue with this work. We have to purchase always enormous amounts of medicines, pay the medical staff a love offering and we need to maintain and pay all defects of the ambulance. We also don’t want to leave people with special or acute medical needs who need a hospital or would die otherwise.

And yet we see great results and so much joy and gratitude again and again when we go to those places where medical help is not seen. If I ask when the last medical team came, they always point to us, even if we weren’t on that place during months…

Currently, Manceau and surrounding villages are seriously affected by lice, scabies (provoked by mites) and fungal infections. All very contagious skin diseases. On top of it, due to the pain and the immense itching, the many scratches provokes bacterial infections.
At least 80-90% of the children are affected. We need to treat at least a 1.000 children with rather expensive medicines as Ivermectin, Metronidazole, etc…
Anyway, most of the children and elderly die of lung and abdominal infections that could be rather simply avoided by an earlier treatment with antibiotics. Their immunological system had already been severely weakened by malnutrition which makes – for example – the progression of a simply throat infection to a pneumonia (lung disease) much faster and worse. The same happens with many other tropical and other diseases.

After almost 10 years (since a major earthquake with 100,000 deaths), it remains difficult to continue this work. We do not want to leave Haiti but it’s very difficult to keep healing without your support! We count on you as all our work is donation based. All gifts to “Doctors On Mission” are 100% tax-deductible (as we are a 501 (C) (3) organization). You will receive a receipt for tax purposes, and we won’t share your information with anyone. Our EIN is 04-3792729.
Then, we went to BOLIVIA where we reached villages that were located between thousands of wild fires. Sixty Five Percent (65%) from Bolivia belongs to the Tropical Forest (part of the Amazon going toward Brazil). We have been working there in many villages during the last 10 years. With some calculated risks, we reached these “indigenous” villages. The disaster was unseen as more than 3 million hectares of forest were destroyed only on the Bolivian site of the Amazon. It all happened after a 5-month drought and people trying to get back more fields for economical and political reasons.

About 30 million animals have died and even more are suffering terrible burns. Still worse, almost nothing is known about the number of deaths among the indigenous population (33 Indian tribes) as the Bolivian government hides many figures and actually does not want us – Westerners – to come and help there. Fortunately, many villages have built large sand dikes and roads around their villages to stop the fire from spreading to their village. An indigenous Chief moved to tears to express his gratitude to our team.

Our medical expedition was a great blessing, all the more because of some sudden rainstorms during our outreach. Suddenly, the temperatures dropped from over 110 degrees Fahrenheit to an unseen low of 55 degrees. Such a low temperatures are unheard of by the locals.

So, we arrived with a “blessing of rain”, with medication, creams, bandages, clothing, food, etc … and many could be helped. We were deeply touched when, at the end of the help offered to one of the villages, an indigenous chief was moved to tears and expressed his gratitude to our team. Till then, nobody had gone to help his village.

When we finally arrived in the BOLIVIAN ANDES, I heard that my friend Dr. Ino (55) suddenly had died due to the deathly “Chagas” disease. He died of a cardiac arrest after years of struggle against the deadly Chagas disease. This illness had completely undermined his body in the last year and a half. No one could have suspected how serious it was because he himself did not really reveal his suffering. My (our) grief was great! I suddenly had to say goodbye to a friend with whom I cooperated intensively since 1993! Carolien and I rushed to Tarija (South Bolivia) to attend his funeral. Dr. Ino leaves behind a woman and three studying children. As a local volunteer Doctor, he left no savings behind…
Furthermore, we have 1 seriously ill young man (40 years) suffering from ALS disease. Benjamin, the brother (see below in wheelchair) of 1 of our employees from our Andes base is a young father who will probably leave behind his wife and 2 studying children in a couple of months. We hope that some gifts will come in to help these families.

Best regards from Rik, Carolien and our teams in BOLIVIA & HAITI.

PS: Now that we are near the end of the year, we would love that you remember our Mission. As written above, “Doctors On Mission” is 100% tax-deductible as we are a 501 (C) (3) organization and we have no administration costs. You will receive a receipt for tax purposes, and we won’t share your information with anyone. Our EIN is 04-3792729.